Patent Herbs are herbs that are formed into tablets. I used a concentrated form that was made from herbal powder. They are formulated to Augment the 'syndromes' recognised in Traditional Chinese Medicine. See TCM page. An example would be Xiao Yao Wan which is used to tonify Yin and Blood and to move Liver Qi. There are thousands of different Patent Herbal formulas, I used only those from reputable suppliers who I knew didn't use things such as endangered species in the tablets. If you go to a Chinese shop there is the chance the Patents will have endangered species or chemicals such as steroids in them so be aware. One example of this is the use of Seahorses in some remedies, they can be substituted for in the tablets but the Chinese shops may use real Seahorses!

Patent Herbs are not like 'western' medicines, you often take 4 three times a day and they can take over a month to start working. They work at a deep level in our bodies and are often repairing the cause of our problems rather than masking the symptoms like a lot of 'western' medicines do. 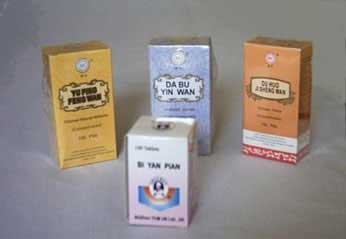 Unfortunately Patent Herbal remedies are now outlawed for the use of Acupuncturists by the EU, although we have used them for many years and many of us have done courses on the subject. There are many lobbyists who are sponsored by the Pharmaceutical Industry who pushed for this. They want Patent Herbs to be Patented (seems like a play on words!) This will mean only companies like those in Pharmaceuticals will be able to afford the licensing process and the cost of the herbs will skyrocket in price.I hope when we finally cast off the chains of the EU we can get back to common sense and allow these types of medicine again. I take them personally and I have to get them from a Chinese company that flouts the rules!

I am just getting a small line of Food Supplements that are designed on the lines of Chinese Patents so there is still hope!!! Don't you just love these useless regulations!

I can now supply 17 different food supplements that work on Chinese principles,

an example is below;

They are not"Patent Herbs" but Food Supplements,