Acupuncture is performed by inserting small, sterile and disposable needles into points on the body that are recognised as Acupuncture Points. They 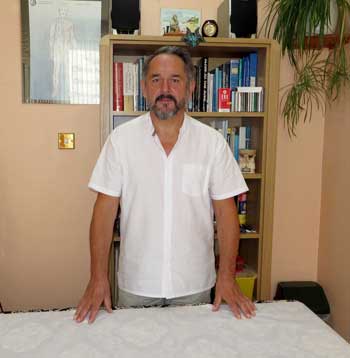 are often on the Meridians.which are energy channels that surround and run through the body. The energy is known as Qi and is often defined as 'Life Force'. It is Qi that brings this mass of bones and tissue that is our bodies to life. When we start to get ill our Qi is affected, it can stagnate or deplete or go out of balance in other ways, it is Qi that is balanced by the insertion of Acupuncture needles into Acupuncture points. In this way disease or dis-ease can be controlled and often a person can be brought back into good health. 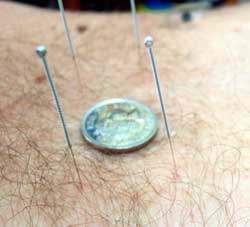 The needles are very small. This shows four needles next to a 10p piece

A Small amount of history

1,500 BC Shang Dynasty, first evidence of Acupuncture. Needles were made of bone and Ivory

400 BC Warring States Period, Acupuncture theory changed from a form that that disease was caused by bad 'spirits' to a form based on natural observations. The concepts of Yin and Yang and the Five Elements were formed. Needles were made of Bronze and Iron.

200 BC the 'Nei Jing' was published, this is the book that most Traditional Acupuncture is based on.

618-907 AD Tang Dynasty. An Imperial medical College was active in China, the course lasted seven years!  We were in the 'Dark Ages'!

1949 AD The Peoples Republic of China was formed. Initially Acupuncture was seen as 'folklore' and outlawed as it was seen as a medicine of ignorant Peasants. Many of the ancient books were burnt and lost for ever. Eventually Acupuncture was seen as valuable, cheap and effective. A committee was formed to modernise the theory and much of the theory that was a odds with the values of the Communist Party was dropped and a new form of Acupuncture was born which became known as Traditional Chinese medicine (TCM). many Western Practitioners now Integrate the old and new forms together to give maximum effect.

You probably don’t remember me but I came to see you last summer for a one off session following a cycle of IVF. I’ve been meaning to get in touch for a while to tell you that I left you feeling relaxed and positive with a real feeling of well being and, amazingly, 9 months later I have a baby daughter! I’m sure the acupuncture I had helped this process along and I wanted to thank you. Regards,