An older style of Acupuncture

This is an older style of Acupuncture based on the fact that many natural phenomena such as the seasons, human nature and more can be divided into Five 'Elements'. The Elements are Fire, Earth, Metal, Water and Wood. In the case of humans if a person is in absolute health then they would be completely balanced between the five. But, everyone tends to go out of balance in a particular way, This is known as their Causative Factor (CF) this is another name for the Elements in humans. So if a person often has digestion problems they may be an Earth CF as Earth is made up of the energy of the Stomach and Spleen. So when they get ill their skin may have a yellow sheen particularly in the face. They may seem over sympathetic or often seeking sympathy themselves. They may prefer the spring as a season as this is the Earth season. Their voices may appear to 'sing' as they speak this is the Earth sound humans make.

There are two organs associated with each Element except for the Fire Element which has four. So for the Earth Element Stomach is the Yang and Spleen is the Yin. The Qi energy of the body cycles from organ to organ through the meridian system. So if you look at the diagram below you will see that the Triple Heater is the 'Mother' of the Stomach and the Large Intestine is the 'Son' of the Stomach. If the Triple Heater is weak then the Stomach will not be nourished and in turn this may affect the Large Intestines energy. The whole system follows an elegant, well balanced system.

To find out which CF a person belongs to an Acupuncturist will ask lots of questions during your diagnosis. From the way you answer we can tell which is your CF, we can even tell this from your smell so don't wear strong perfume! 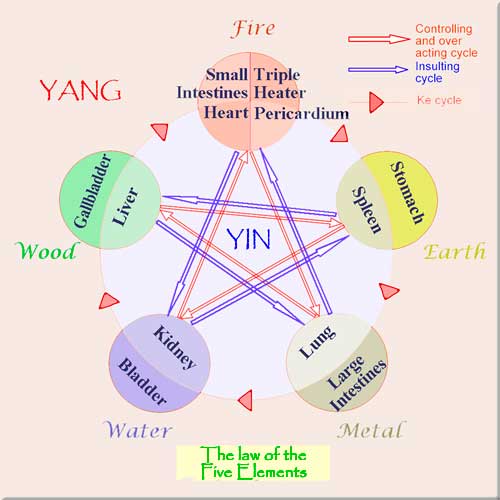 Please ignore the Dragons, they are naughty and get everywhere!

Return to the top

a good book on the subject of the Five Elements

by my teacher Angela Hicks