Cupping is the art of placing suction cups on Acupuncture points all over the body. The cups can be made from bamboo, glass or plastic. Mine are made of a very hard plastic with a suction valve on the back. A suction gun is placed against this and a small amount of suction is produced to pull the cup onto the skin. The cups are left on for about 20 minutes and can sometimes be drawn along the skin if it is coated with a light oil such as Grapeseed. Cupping can be used for treating many problems as an alternative to Acupuncture or with Acupuncture. 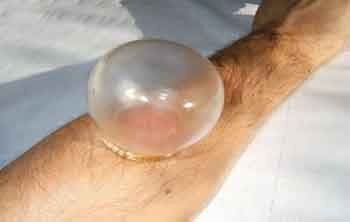 I personally use it to treat colds and flu, stress and painful joints. It could even be used on the tummy for painful periods.

In the hands of a skilled Practitioner the amount of suction produced by the cups can be varied to suit the patient. For instance you would not want to use heavy cupping on an M.E. Patient but, a stressed, healthy Patient would be quite suitable. Cupping produces the tell tail marks that make it look as if you have been attacked by a giant Octopus! This is normal with heavy cupping and may take a while to go but while the marks are visable 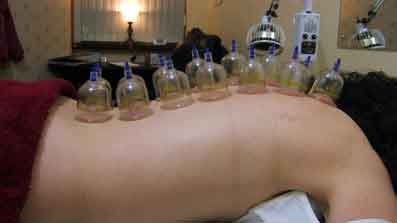 the therapy is still progressing. This therapy has been a part of Chinese Medicine for thousands of years but has also been part of many European folk medicines including England where it seems to have died out about 100 years ago. It is still used in Turkey and Poland. Cupping was often applied by the Mother or Grandmother to clear disease in their family.

Meta-analysis showed cupping therapy combined with other TCM treatments was significantly superior to other treatments alone in increasing the number of cured patients with herpes zoster, facial paralysis, acne, and cervical spondylosis. No serious adverse effects were reported in the trials.

A link to the Clinical trial